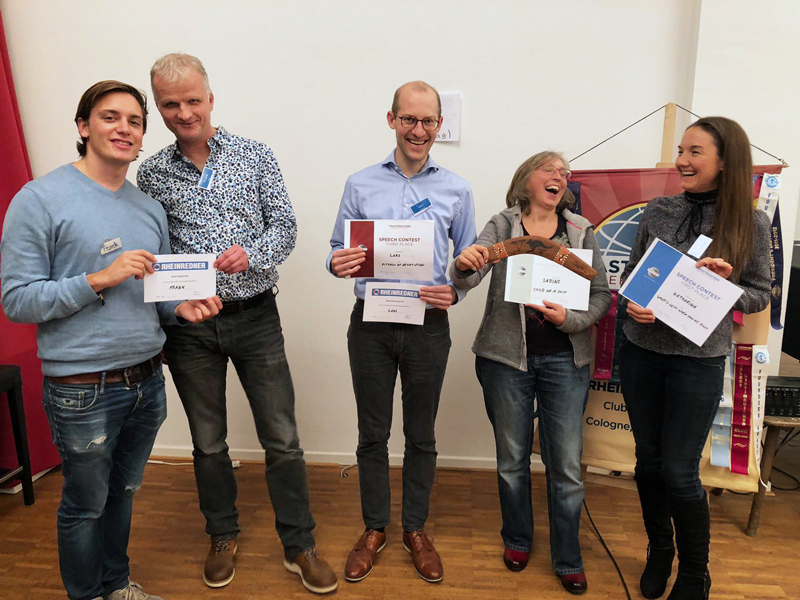 What a nice meeting yesterday yet again. Since we had to skip last weeks English Toastmaster evening we postponed it to this week.
Also because we were asked by the Bonn TM Club to take part in the informal competition which is held in English. So we took the chance to vote for our winner for „best prepared speech“ to represent our Club in Bonn on the 1st of November.

But let’s start at the beginning …

Because there were not a lot of people, we had to multitask and we succeeded as usual. Thanks to everyone who helped to make this happen!

Sabine was not just taking part in the competition and got in second but also had the role of the Toastmaster of the evening and was guiding through the whole show. Who ever took part in a competition knows that this adds additional stress to the contestant so we have to praise here for that for sure.

Patrick announced the Word of the Day which was #hashtag. Frank our „Ah Counter“ of the evening got the award for his #killerofthefiller.

Katharina, Lars and Sabine held prepared speeches and where competing within the informal contest.
Katharina got first place with her Speech „what is left when you are right“. She can go to the speech contest on the next level which is taking place November 1st at the Bonn International Toastmasters. Congratulation!

Sabine came in second with „Child on a ship“ and Lars took third place with „pitfalls in negotiations“.

Our guest Michael gave an interesting and passionated speech on and about „Passion“.
Patrick’s overall topic for the „Table Topics“ fitted well into the motto of the evening: „competion„.

Lars, our guest Frank, Mario and Martin gave their best to answer questions like: How do you prepare for competition or how to you deal with anger managment. In the end our guest (Frank) drove this baby home.

Thanks as well to our evaluators Anne, Peter-Christoph, Frank, Lars and Peter-Christoph again.
We are happy and looking forward to see everybody (and more of you) next week.